How Long Can an Arteriovenous (AV) Fistula Last?

People who undergo hemodialysis need a way to access their blood so it can be removed from the body to be filtered, and then put back into the body. Health care professionals and kidney disease advocates believe the optimal hemodialysis access is the arteriovenous (AV) fistula. DaVita recently asked patients, “Got Access? How Long?” to find out if the AV fistula would come out on top. It did. Many people are curious as to how long an AV fistula can last — for four DaVita patients, the answer is 35 years.

What is an AV fistula and why is it preferred for hemodialysis?

An AV fistula is surgically created by connecting an artery and vein. When these two vessels are connected, the vein grows larger and is able to handle more blood volume. Usually an AV fistula is made in the arm or leg so it is easily accessible for dialysis treatment. After several weeks or months, the fistula matures making it ready to use for hemodialysis.

In March 2005 the Centers for Medicare and Medicaid (CMS) along with other leaders in the kidney care community launched the Fistula First initiative. This initiative was started to support better health for Medicare patients on dialysis and lower costs for the Medicare program by increasing the number of hemodialysis patients using fistulas as their hemodialysis access.

The AV fistula is considered the “gold standard” access because:

If the AV fistula is best, why do people have AV grafts and catheters?

Some people may not be able to have an AV fistula. Many people find out they need dialysis immediately and do not have time for a fistula to be placed and mature. In these cases, a central venous catheter may be placed to begin dialysis. Ideally, the person will then have an AV fistula created and will remove the catheter once the fistula has matured and can be used for hemodialysis.

Some patients may not be able to have an AV fistula because their arteries and veins are not strong enough. In these cases an AV graft may be chosen, as it uses a synthetic tube to connect the patient’s artery and vein. This creates an enlarged area for blood to flow through.

In some situations the AV fistula is placed but needs additional procedures to help it mature. Some studies indicate that people with diabetes, elderly patients and women may not be ideal candidates for a fistula. However, more recent studies show this is not the case. Each patient should talk with his or her doctor, and ask for “vessel mapping” to see if they are a candidate for a fistula.

DaVita patients Anthony Logan, Barbara Raymond, John Horath and John Hart each had an AV fistula placed in 1972. And, each one of them is on dialysis now and using their 35-year-old fistula. 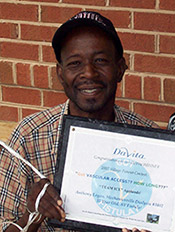 Anthony Logan got his fistula in his lower left arm when he was eight-years old. Doctors knew his kidneys would fail due to a congenital kidney disease. Anthony was able to stay off dialysis for about 10 years, but started hemodialysis when he was 18. During those 10 years before dialysis, Anthony’s fistula was maturing along with his body and was ready for treatment when his kidneys failed. Anthony says he has a “great vascular system.” He has no vascular disease, is not diabetic and his fistula has never clotted.

About three years after starting dialysis, Anthony received a kidney transplant. “When I got the kidney I enjoyed it,” states Anthony. He said there were people who asked him why he wanted to keep the fistula, if he had a working kidney. “You never know what could happen down the road,” Anthony would answer, adding, “I know what works for me.”

A few years ago Anthony had to go back on dialysis and was able to use his same AV fistula. Anthony is meticulous about his fistula. “I keep it clean and I check it,” he reports. “I’ve never had any trouble with it at all.”

As far as dialysis, Anthony says, “It doesn’t stop me from what I’m doing. It’s something I got to do, so I keep on doing it. If that [dialysis] machine wasn’t here, I wouldn’t be here. If you see one of my tests you won’t believe it. I cut grass and work on cars. I am the most going-out person you know.”

“I’m trying to help other people. I even go [to the dialysis clinic] on days off and see everyone. I get my inspiration off of people. I like to talk to them. Let people know life isn’t as bad as it seems. We all have ups and downs and have pains. As long as you can get up in the morning and thank the Lord you see another day; it’s good.” 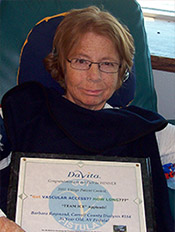 When a 14-year-old Barbara Raymond was diagnosed with kidney disease in 1972, she immediately had her AV fistula placed in her lower left arm. She began dialysis and after a month received a donated kidney from her father who was a perfect match. Barbara stayed on dialysis a couple of months after the transplant until the kidney began functioning fully. Once her new kidney was working, she was able to keep her transplanted kidney for 25 years.

About four years ago she started dialysis again using her same AV fistula that was placed in 1972 and she’s still using it today. Barbara found out about the “Got Access? How Long?” contest from her DaVita center’s social worker. “It’s a good thing,” Barbara says about being one of the four to have a fistula for 35 years.

This isn’t the first time John Horath has been recognized in print. He was written up in the local newspaper when his DaVita center celebrated John’s 35 years on dialysis with a visit from his Congressman. In addition to being on dialysis for 35 years, John has also used his same AV fistula for all that time. According to John his fistula was placed in his lower right arm on March 1, 1972. A few weeks later he started dialyzing 6 to 7 hours per treatment. “That’s how long they did it back then. In 1977 I started running 4 hours, and then about a year ago went down to 3.45 hours per treatment. I asked the doc to go to 3.5 hours, but he said we could split the difference.”

When he first got his AV fistula, John says, “I felt a buzz and went to the doctor; he said that’s what it’s supposed to be — but it was weird.”

Back in the day, it took time for John to get the right diagnosis. “I got crazy sick. I didn’t know what I was doing and went flying around the room I had so much poison in me.One doctor thought I had yellow jaundice but the medicine he gave me made me sicker. Then another doctor said, ‘Son, you have kidney disease.’”

John learned he had a bladder deformity causing damage to his kidneys and then kidney failure. Because of the bladder problem, John decided against a kidney transplant, “The only way I could have a kidney transplant was to have a bag for urine on the side and I was afraid I would get it infected working in the field.”

There’s a saying that hard work never hurt anyone, and actually John thinks that’s what helped him. According to John, “I think all the work I did like splitting down trees and strong, hard work, climbing barn roofs, cutting grass, stacking feed, working on elevators — I was raised on a farm...tough and rough — all that helped to build my fistula. It was a lot stronger before. Now I’m in the nursing home. I still do extra exercise with my hands because they get stiff from arthritis. Sometimes during dialysis I exercise clay putty and make the [dialysis] machines go off beeping from moving around so much.”

For 23 years and 8 months John’s fistula was never touched, and then he had to have it cleaned out twice for clots, and nothing done since.

John wonders, “How many sticks have I had in 35 years?” Then he answers, “Not counting the misses probably about 11,000 times, but at least 12,000 with misses. I even stuck myself for a period of time.”

“You know,” says John, “the doctor who put in my fistula was in St. Louis, and I never did know his name, but he knew what he was doing.”

John Hart from Pittsburgh is a recognized artist in his DaVita center and was featured in an article in the Pittsburgh Courier. “I painted some of the panels on the ceiling at my dialysis center. I would take them home and do six at a time. Now patients can stare at my paintings during dialysis.” Colorful paintings of picturesque landscapes, portraits of people and whimsical cartoons have replaced the once plain white ceiling tiles bringing enjoyment to patients, staff and visitors.

John always had a talent for artwork and says it helped him get through his dialysis sessions when his fingers weren’t too swollen to draw. John recalls, “I did so much artwork just to keep myself going.” When his kidneys failed in 1969, John began peritoneal dialysis (PD) because there wasn’t a hemodialysis machine available near his home in New York City’s Harlem.

In 1972 he had a fistula created. John reports, “At first it was red and swollen and then I did exercises and kept my arm wrapped up and didn’t lift anything too heavy.” After his social worker found a hemodialysis center and his fistula was mature and ready to use for treatments, he started hemodialysis in Queens, New York.

After 10 years on hemodialysis John received a transplant in 1982. “I was so glad to get it. I got both kidneys from a little girl who passed. I had a transplant that lasted 20 years.” John said he took care of himself and never had adverse side effects from the anti-rejection medicines. After the transplant failed, John went back on dialysis using his same AV fistula that was created in 1972. “I went back to dialysis six years ago,” says John.

John has been considering another transplant. “I was going to get on the transplant role again. I’ll be 71 years old at the end of August. I might attempt it again, but I don’t think about right now.”

When it became necessary, these patients who received kidney transplants were able to "re-start" hemodialysis without an additional surgery to create an access because their AV fistula was already in place and working. The longevity of the AV fistula, as witnessed by Anthony Logan, Barbara Raymond, John Horath and John Hart, makes it the best choice for patients who choose hemodialysis.